If you've been impacted by the COVID-19 pandemic, you may be eligible for assistance with ACT rates and other taxes. See our COVID-19 Assistance web page for details.

What is unimproved value?

The unimproved value is what the block of land is worth subject to its highest and best use under the lease conditions. It does not include any improvements on the land, such as buildings, landscaping, paths and fences.

This is different from the full value or market value of the block.

The value of your land determines the rates and land tax charges.

Some Territory taxes like rates and land tax are calculated using the unimproved value of a block of land. Unimproved values are determined by qualified, independent valuers.

We send all property owners a valuation notice with their annual rates assessment notice. This includes the property's unimproved value as of 1 January that year.

For valuation purposes, we treat unit title developments as single properties and send the valuation notice to the owners corporation; we don’t send individual valuation notices to unit owners.

How are values assessed?

If there have been no sales of vacant land in the area or in comparable areas, valuers work from the sales of improved properties and deduct amounts for improvements. From this information, they calculate an unimproved value of the sale blocks and use these to assess the unimproved value of other blocks.

Why do values change?

Land values rarely remain the same over time. Values within the same area and between areas may change, and the prices people are willing to pay when they buy property are good indicators of these changes. To make sure the land values used for determining rates are as current as possible, our office engages qualified contract valuers to carry out a general revaluation of all parcels of land annually.

The determination of residential unimproved values and rates

The unimproved value of residential property is reviewed each year and values are redetermined as at the base date 1 January.

For suburban blocks, sales are analysed by locality and if the number of sales is statistically significant, property values will be adjusted to reflect the sales related data. Where there are no sales of vacant land, sales of improved land (house and land) will be included and adjusted to determine the change in the underlying land value.

Over the last several years there have been a number of sales of large residential unit development sites across the ACT. These sales have been used to adjust unimproved values for similar residential unit complexes. * This smooths-out the effect of a large change in values in any single year.

* For units, the variable component of the rates charge is based on the AUV of the complex and allocated on the basis of unit entitlement. 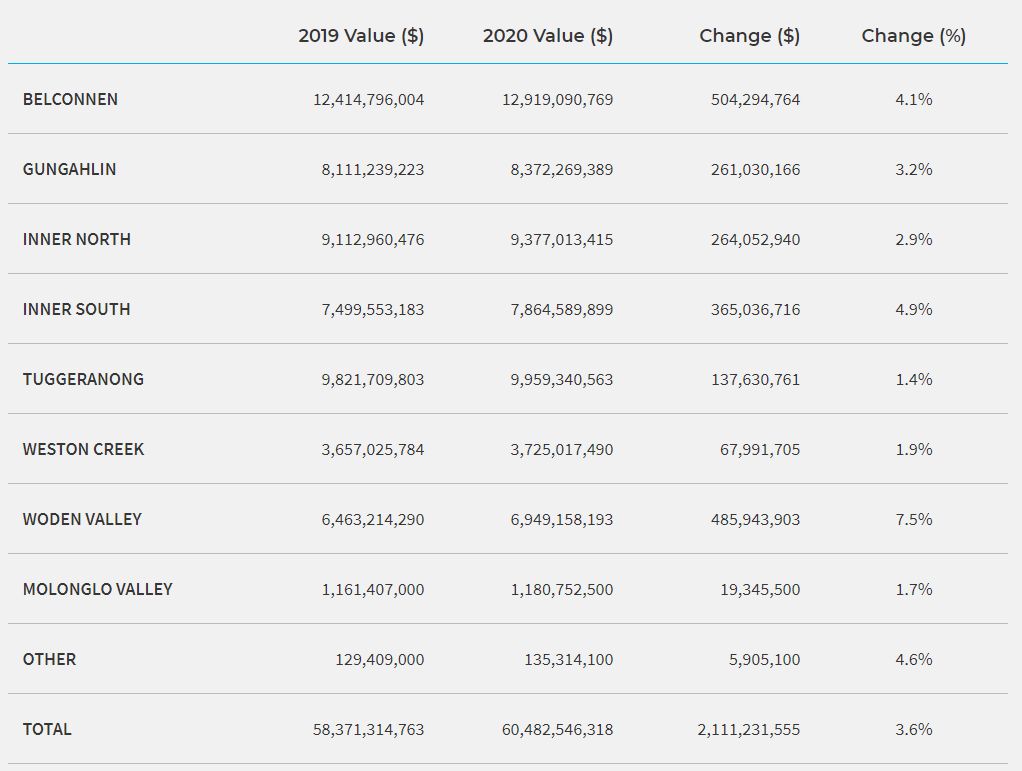 Residential unimproved values for rating purposes across the ACT increased on average by 3.6 per cent from 1 January 2019 to 1 January 2020. Suburbs in the Woden Valley had the largest increase of 7.5 per cent with suburbs in Tuggeranong having the smallest increase of 1.4 per cent.

For 1 January 2020, a comprehensive valuation review was undertaken on properties in the Woden Valley district.  This involved redefining localities and regrading particular properties that were out of alignment with other similar properties.  Relativities between property values in Woden Valley and other districts are now more comparable, as are relativities between property values within the suburbs of Woden Valley.  Properties in O’Malley and Farrer had the largest increases in value from the review.

For 2021 a comprehensive valuation review will be undertaken for Tuggeranong.

Commercial unimproved values for rating purposes are re-determined for 1 January each year.

In 2020-21, the Government set marginal rating factors for properties with an AUV of $2 million or less to ensure that there was no overall increase in rates revenue derived from this group of properties.

The group centres of Dickson and Gungahlin had not been comprehensively reviewed for some time and the increases in 2020 reflect a catch up in changes in value that had occurred over a number of years.   The group centres of Belconnen and Greenway (Tuggeranong) were also reviewed and values did not require significant adjustment.

Some increases were made to Kingston property values but further work is required to ensure all properties are at the appropriate benchmarks reflecting sales evidence of recent years.  This work will be undertaken for the next rating period.

Commercial property values in Barton increased on average by 22.5 per cent. This was mainly due to significant changes in a small number of large commercial properties that were updated in line with recent property sales data and realigned with benchmarks for the area.

Some significant sales in Phillip took place in 2018 and 2019 and this has been incorporated into 2020 unimproved values for related property types.  Around 40 per cent of properties in Phillip were already at benchmark values and had no change.

The precincts of Mitchell, Hume and Beard were comprehensively reviewed and the unimproved value of a significant number of properties in each precinct was increased to move to within the benchmark range for the location.  The unimproved value of around 18 per cent of properties in these precincts were already at the benchmark level and their values remained the same.   A number of individual properties in the Hume and Mitchell precincts will need to be reviewed again and adjusted next year.

A review of Fyshwick commenced but was not completed, hence, there was no change to Fyshwick values in 2020. The review will be completed next year and it is expected that there will be some increase in values in Fyshwick to reflect sale prices recorded over the past few years.

Changes in unimproved value for commercial property by area can be found here.

For 1 January 2021 the valuation program will focus on:

Objecting to a valuation

If you think your property's latest unimproved value is incorrect, you can lodge an objection to the new land value.